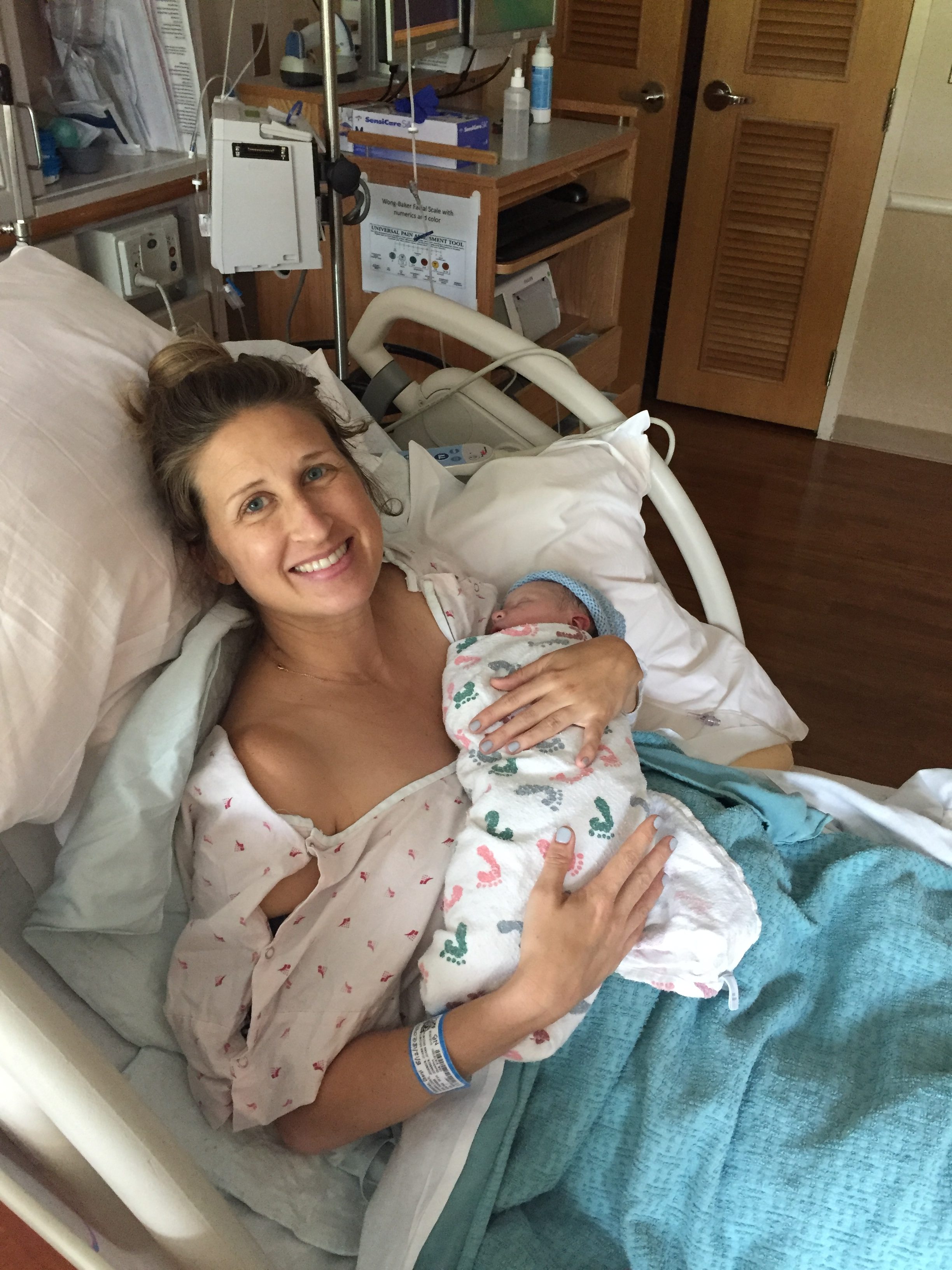 My due date for our third was May 3. Seeing that this pregnancy was right behind my last one, with almost no break, I thought for sure I’d be right on time or even early, assuming that my body never really fully recovered from Walker and would just know what to do. But as usual, I was wrong. Little man just took his sweet time.

My mom even booked a flight for the weekend I was due to help with the boys if something kicked in. And I’m sure she wanted to also meet the little fella! Well, that weekend came and went as fast as it arrived. Although no baby came, just a lot of strong contractions – especially after she made me take a shot of castor oil – we were so happy to have spent some quality time with her since we were all home and just waiting on baby. We did a lot of walks on the beach together, made margs for Cinco, she made us great meals, caught us up on our laundry which was greatly appreciated, cleaned and just soaked up as much grandson time as possible. On her last day we took her to Capitola for lunch and some beach time with the boys. It was such a nice visit. Although I felt like I failed her without going into labor, I think it was a visit well spent! Love you so much Mom!! 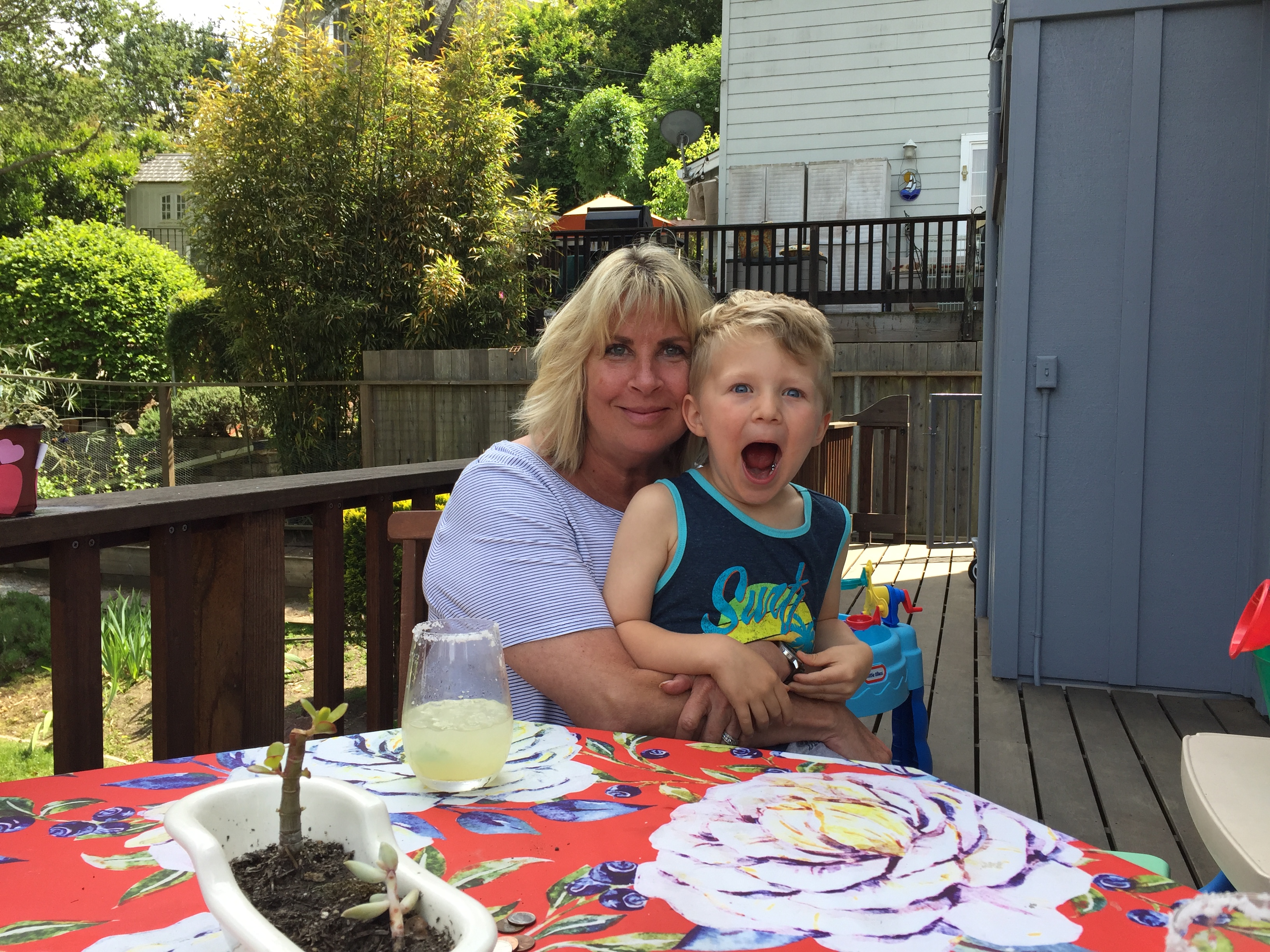 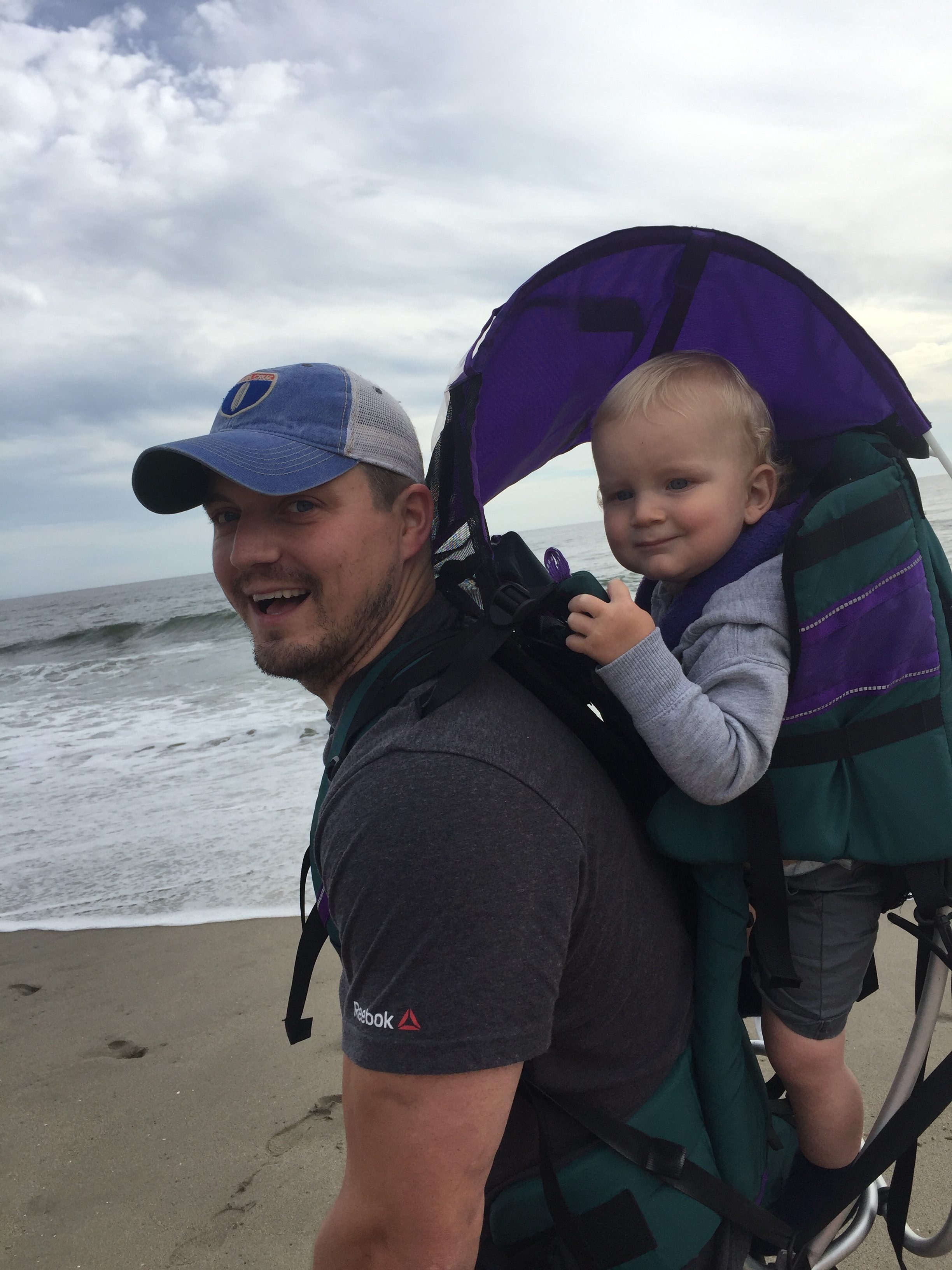 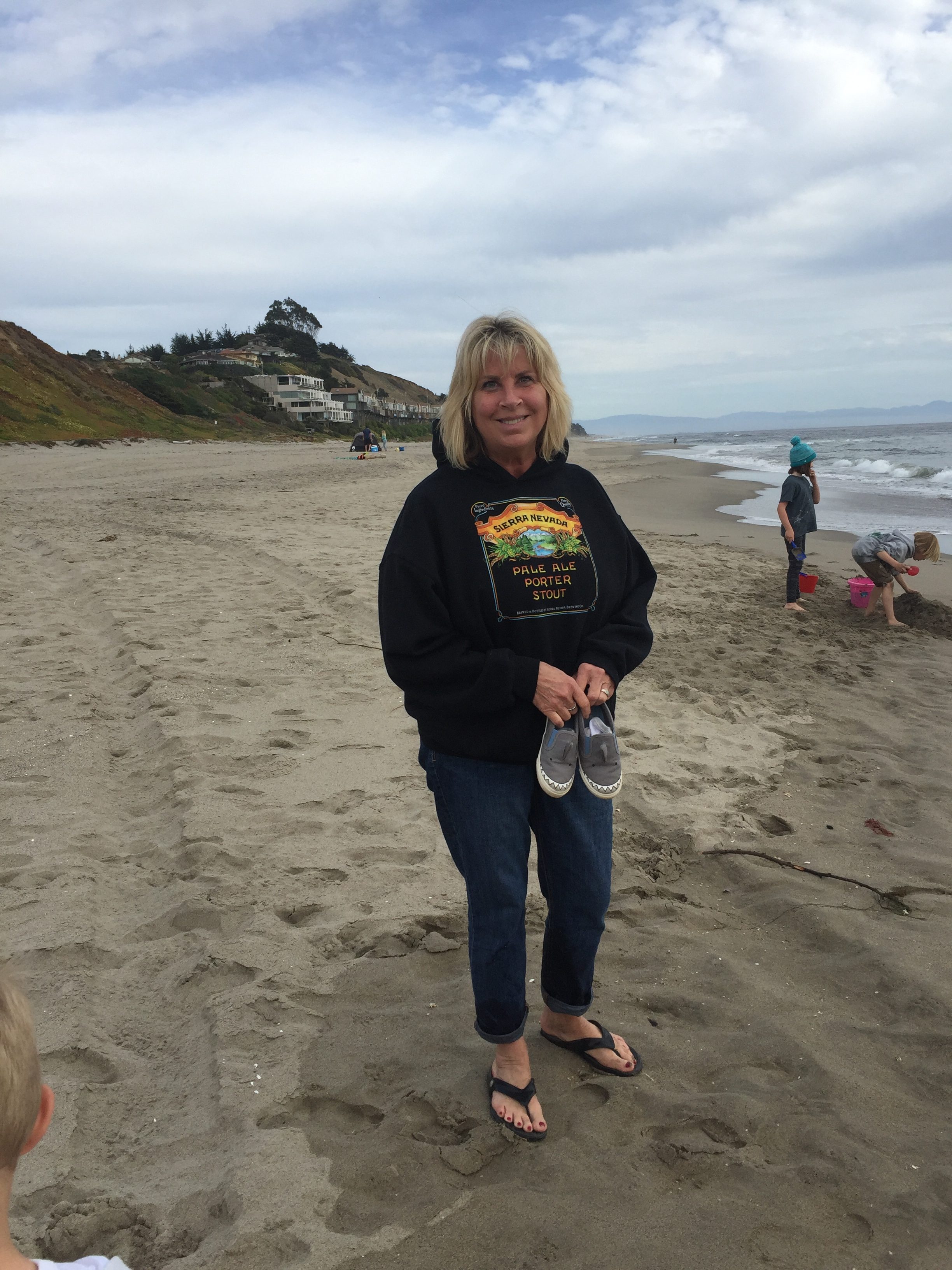 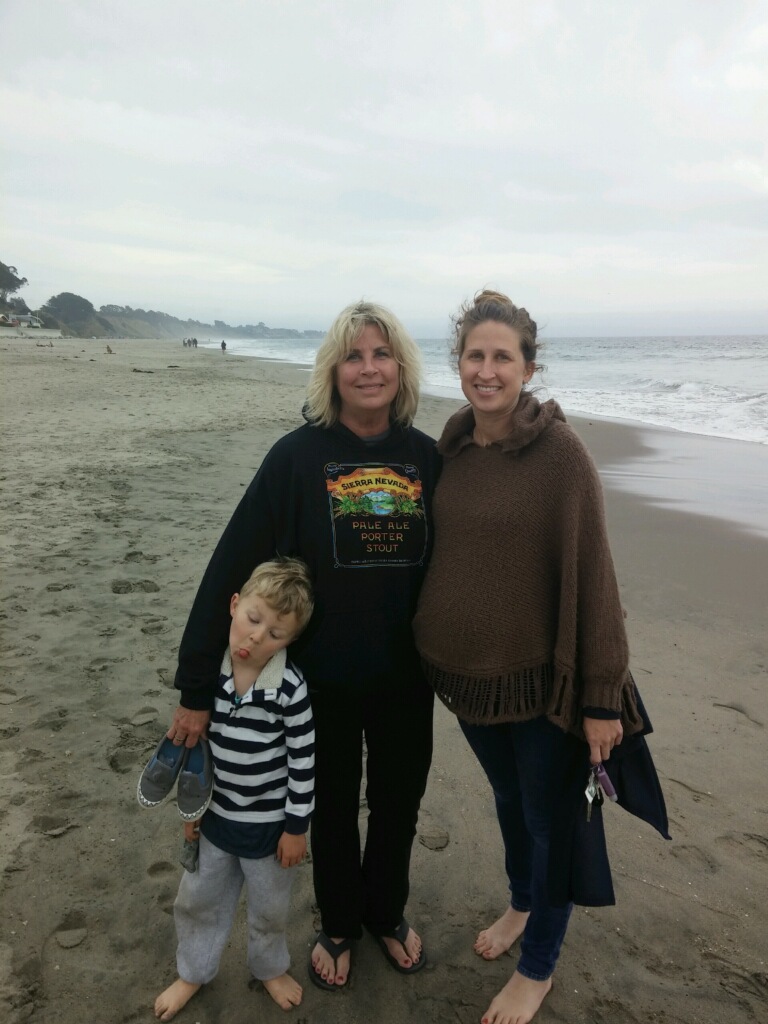 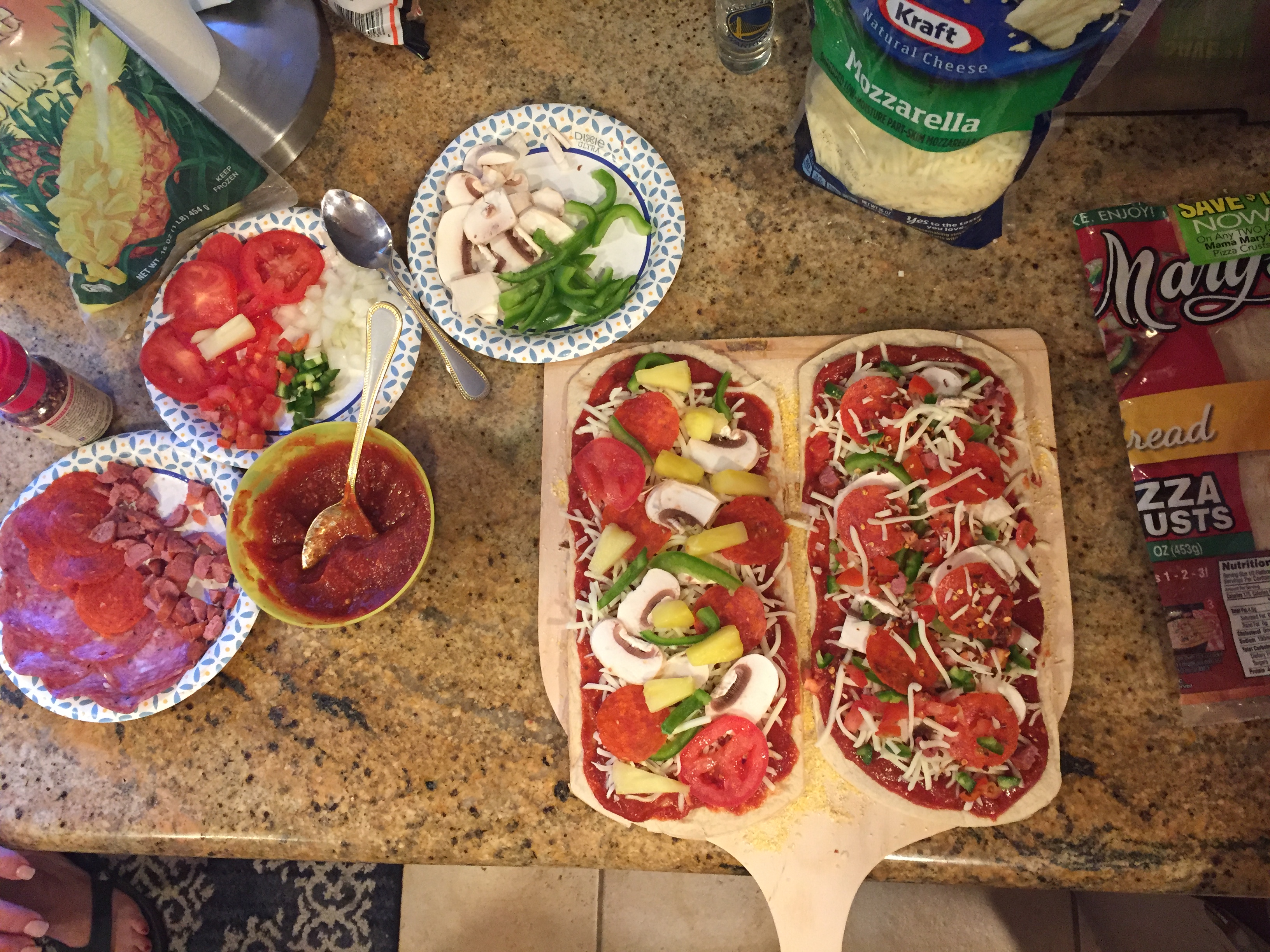 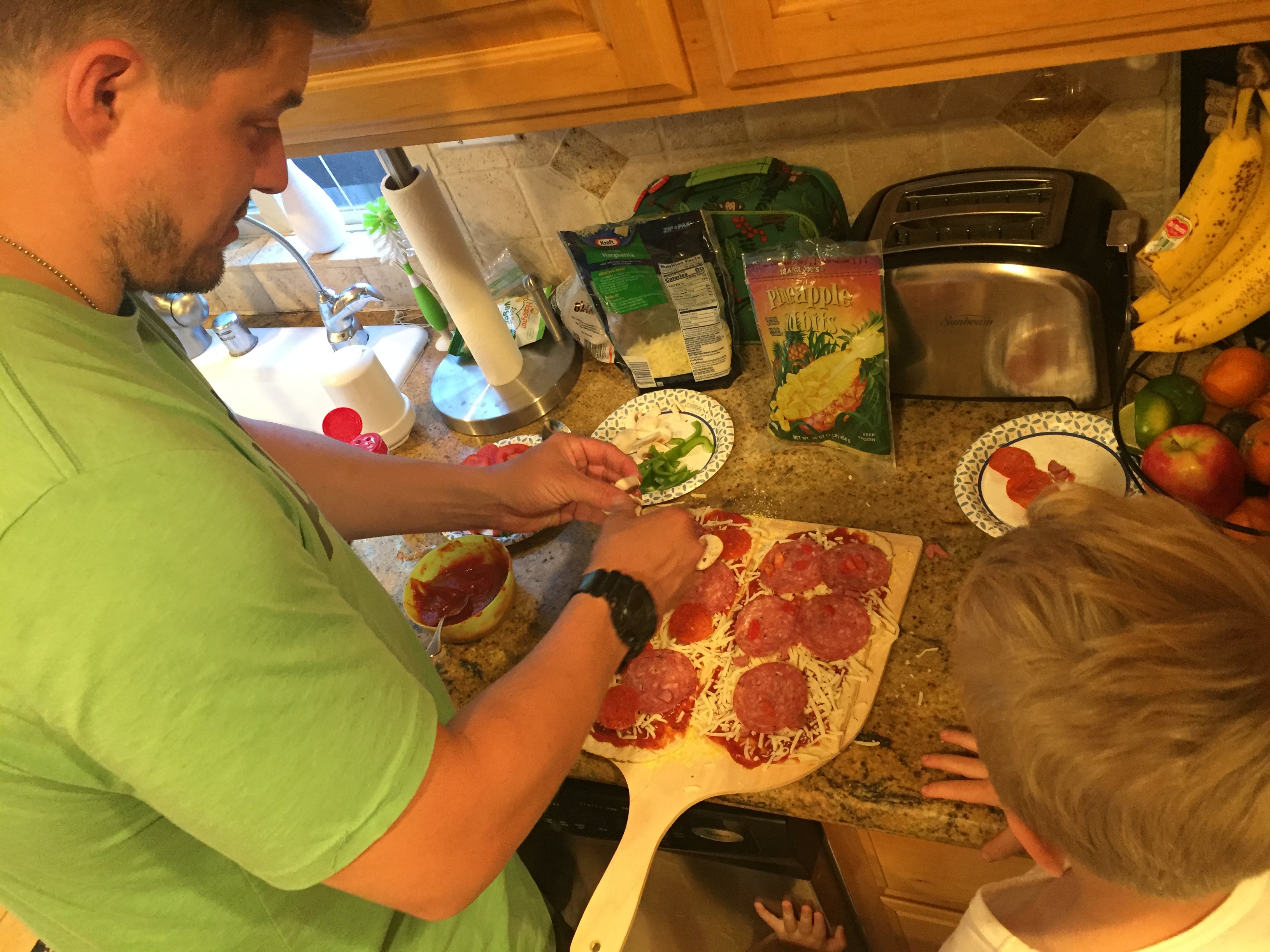 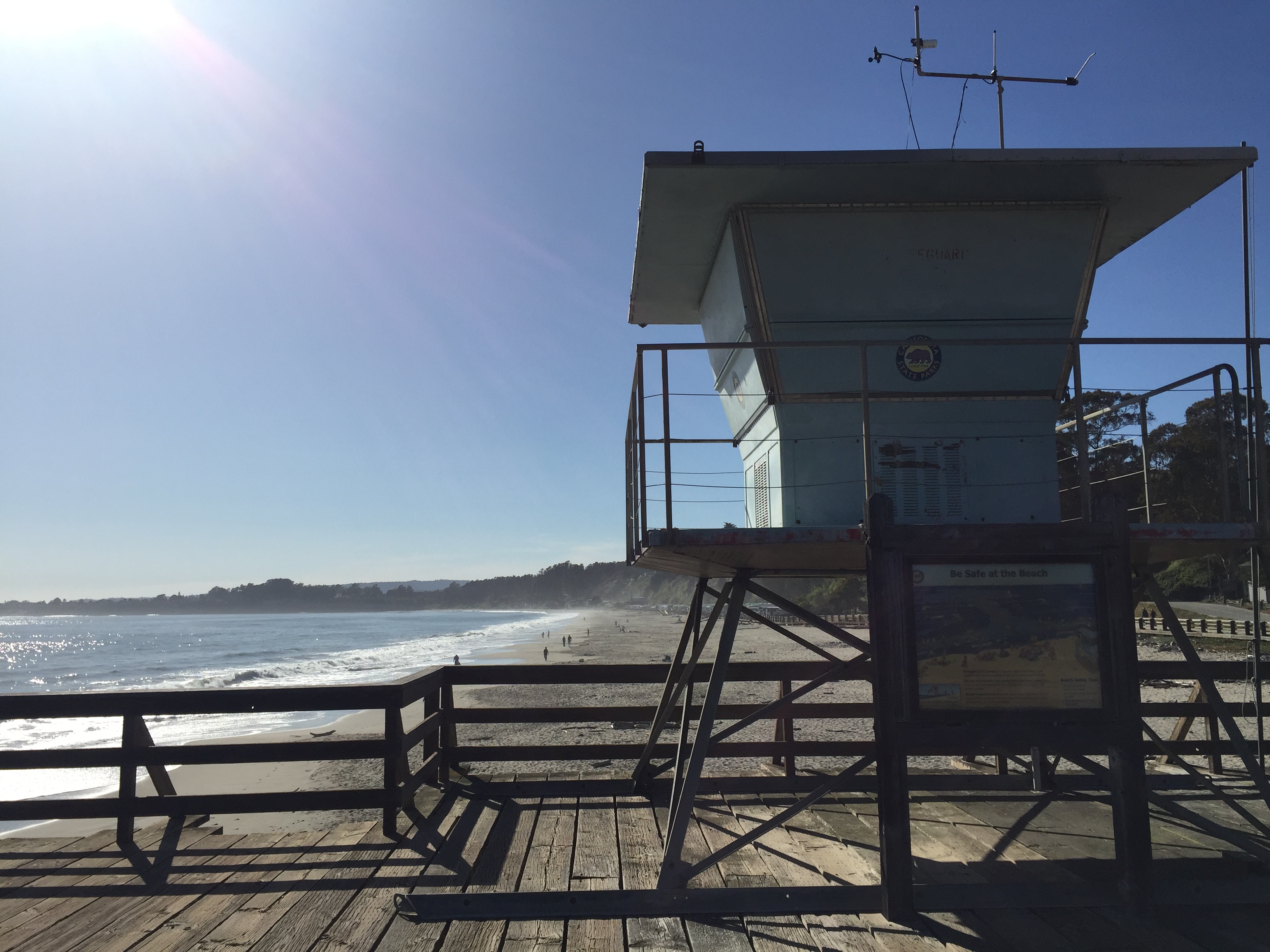 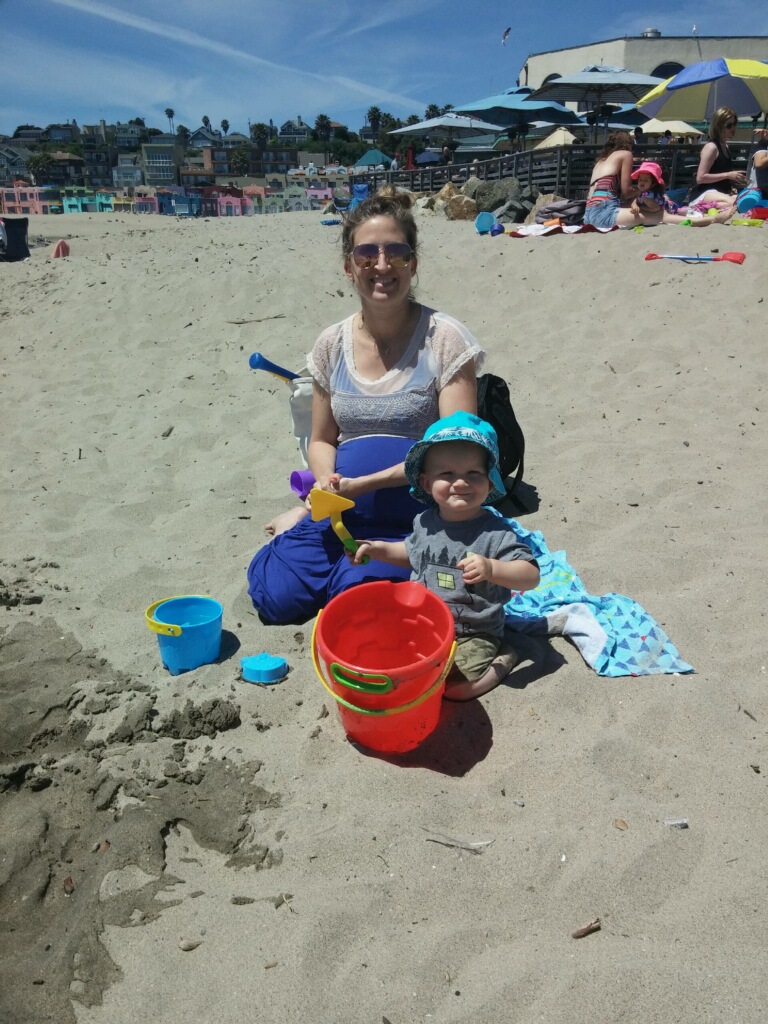 At this point, I had to just stop working, because the stress of work and letting go was killing me. So, I started PTO that week, and then still. Nothing. I was pretty much a zombie at that point. I didn’t even feel like talking. If one more person texted me asking me if I’d had the baby I was going to smash my phone on the ground (yeah right). Sleeping was painful, my mind raced. The contractions came on and off, mostly at night, which prevented me from sleeping even more, unless I was in the recliner. Overall, I was not in a good place mentally, and just wanted it all to be over. I’d literally been pregnant for 2 years. I also just wanted to make sure he was OK and that everything was real and I hadn’t just been living in some twilight zone over the last 9 months. I wanted to know this was really happening! The only thing that got me through at the end was patio time, soaking up the California sun and breeze. 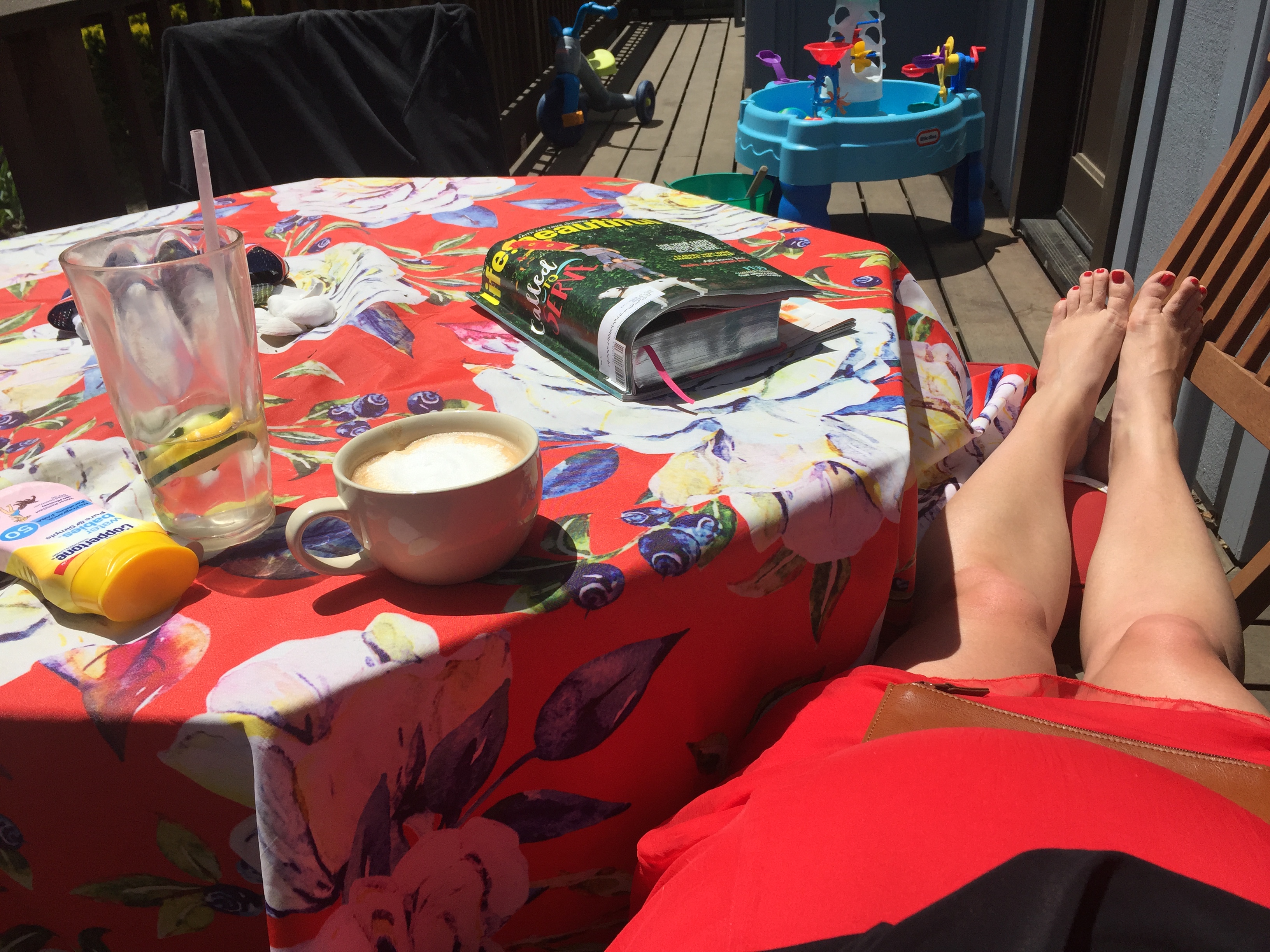 After my 41 week appointment, we decided to schedule an induction for Saturday morning, once Rob’s Uncle came into town with his cousin. We thought, hey, if this guy isn’t coming, let’s wait until our next wave of family can help! And that they did! We welcomed our family in Friday night and then the next morning we said our goodbyes and gave lots of hugs and kisses to the boys and went to the birthing center. They checked me and at only 2 cm, my cervix was still very posterior. Which isn’t the right position if you know anything about labor. So, by 10am they started me on some pitocin. IV in, gown on .. etc. Contractions started to pick up but by 3pm when they checked me again, still no change in my cervix or dilation.  Pretty annoying. We had already watched more TV in that timeframe than we do in a whole month! We ordered dinner and prepped for the cervidil next. Nothing like people up your VAGINA, going back behind your cervix. It’s a real party. I certainly won’t miss THAT about being preggo. After the cervidil was in, they wanted to give me the night to see if it helped move things along and soften things up. We facetimed the boys, watched a FRIENDS marathon, and then caught all the funny movies streaming on MTV. It was so weird for us to watch cable, we haven’t watched normal cable TV in YEARS! All night I was restless, just thinking about the contractions getting stronger and what was to come, especially since the cervidil is what kicked things into gear with Jace those 4 years ago. But by midnight, I gave up and just let myself go to sleep. We woke up the next morning pretty early, ordered breakfast at 6:30am, and awaited the next plan of attack.

My midwife checked me at 8am and still. No change. Except I was now 3cm dilated. Thankfully my favorite midwife of the practice was there to guide me through the next plan of action. I was so worried they were going to recommend we go home and wait. But nope, we decided on some pill (can’t remember the name of it?). I prayed that something would happen that day so she could be there for the delivery!! They were going to start me on a half dosage, but when I saw it, I laughed. It was the size of a baby aspirin, and a half dosage meant cutting it in half (obviously). In my head I thought “really? What is this half little pill going to do?”. I swallowed it and decided to take a whirlpool bath, and we decided for Rob to use this time (assuming the build up from here would be slow based on how this whole induction was going) to go back home to check on the boys really quick. My nurse got me all set up with candles and essential oils in cotton balls to sniff. In the bathtub I decided to text updates to people, and complain. I’d never been so bored in my life, haha. I’m used to going a 100 miles a minute, even at 9 months pregnant, so I was more anxious than ever. By 10:15am, my contractions were starting to feel real. I got out of the bath at 10:30am and got a new gown on and all the other monitor gear, and had to started pacing while the contractions picked up. Rob arrived at 10:45 and by then I was worried that the strong contractions were going to pick up even more, I knew where this was going.

Nurse came in and we called my midwife. At this point, my contractions were intense, and I didn’t want Rob to touch me or talk to me. I had to really breathe and stop to get through each one. At 11:15 my mid-wife comes and I’m 6cm. I politely say to get the epidural scheduled (5-6cm is my sweet spot!). But then my midwife says that unfortunately the anesthesiologist was with another patient who’d been 7cm all night and that we’d have to consider other pain management options and that based on what she saw in my contractions map that I was going to have a baby pretty fast. Great. Childbirth without an epidural? Whhhaat? They went over the options, but I wasn’t even listening. She also directed the team to start getting things set up just in case. I’m pretty sure everyone in the room could see the dissappointment on my face. That was not in my birth plan, yo. But God is good, my friends. My nurse dissappeared only to come back 5 minutes later with the anesthesiologist. She basically flew in (or maybe walked fast but I thought she was literally flying because she was moving so fast) and got everything set up, telling me to get in position, directing Rob where to sit. At this point, I was screaming through the contractions. Yup. I was one of those women you hear at the birthing center screaming. While I was sitting there in position, doing what I could to hold still, my water burst all over the bed and the urge to push was happening. Baby wanted out. They told me to take quick birthday candle blowing breaths, (without the cake) while she worked her magic. I didn’t feel a thing. Probably because I was focusing on breathing and not letting the baby come out just yet. I was in contraction-somnia. She couldn’t give me full relief but enough to help. That’s all I wanted! She was a goddess!  They turned me onto the bed more and checked me and I was 10cm. I basically went from 6cm to 10cm in 10 minutes. At 11:30am, everyone was in position, Rob was behind my legs. I grabbed the hand of my nurse. I could feel my legs completely, and eveything down under. Pushing, screaming, panting, sweating .. I started pushing and after 2 rounds, and some burning, stretching pain as this human poop started to crown. Head was out, then another push for the bod, and he was out. Took only 7 minutes.  Holy hell. They immediately laid him on me and I started to cry. Partially because it was over. He was out and I knew the pain train from there was going to be downhill.  As soon as he was comfortable in my arms, he peed on me. Happy Mother’s Day to me, hahahahaha. After 5 minutes Roberto did the cord cut, we finally started to embrace and smile and kiss each other. We were so wide-eyed at how real things got really fast. He had showed up just in time, ha! Surprisingly I had no tear this time, only the usual issue with my roids, and the placenta came out with no effort on my end. I even looked at this time. Third times the charm perhaps?! I went from bored to sweaty woman beast literally in minutes. Pretty traumatizing but after a couple weeks, it quickly moved into the past and is now just a story to tell. As always, so worth it to have a little newborn fuzzball to snuggle and smell and hold and look at all day with tears in my eyes. Breastfeeding was a whole thing again, but again, after 2 weeks, my nipples were ready for the long haul. It’s a journey for sure, but damn if you don’t feel like superwoman after.

So, here he is. Callen Robert Johannes. Born Sunday, May 13, 2018 at 11:37am, at 8lb 10oz. Another beautiful, healthy boy to call ours. Although overwhelmed most days, we are so beyond blessed. Thank you God, and thank you Rob for your support. And seriously, my birth team was the best. 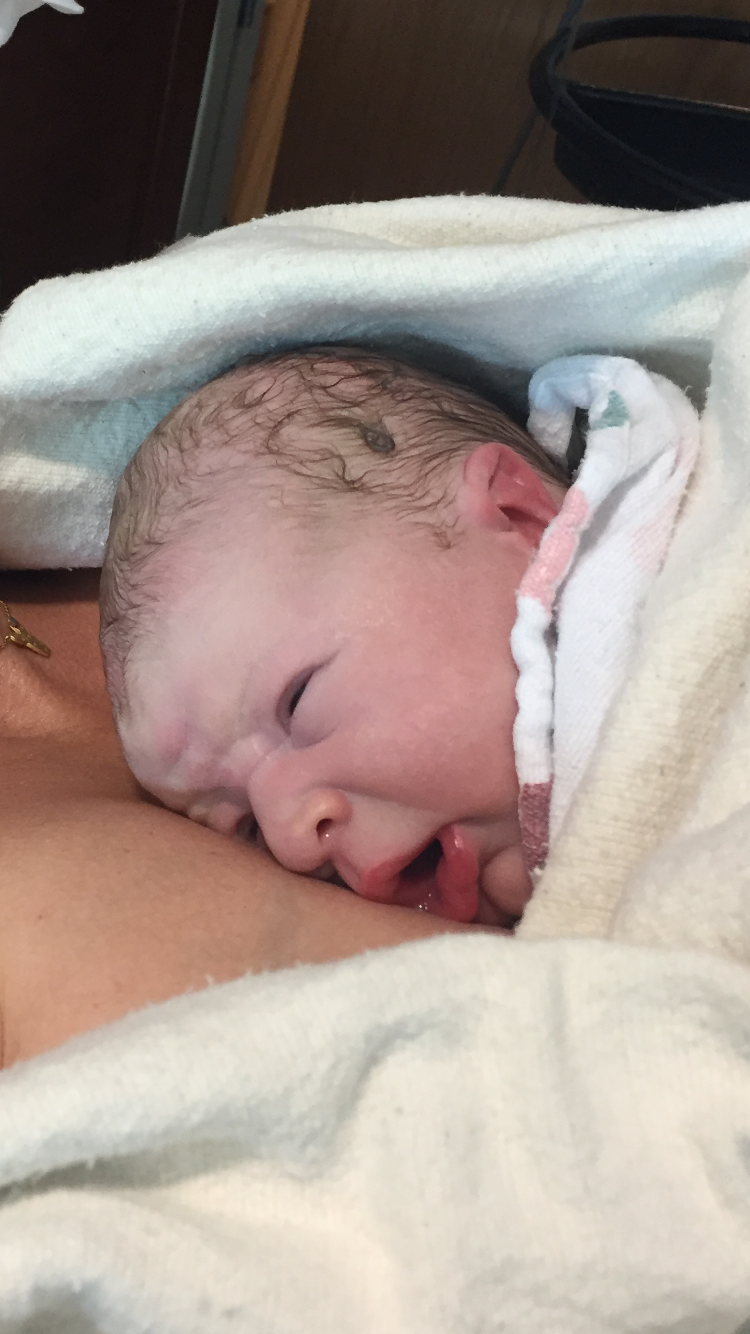 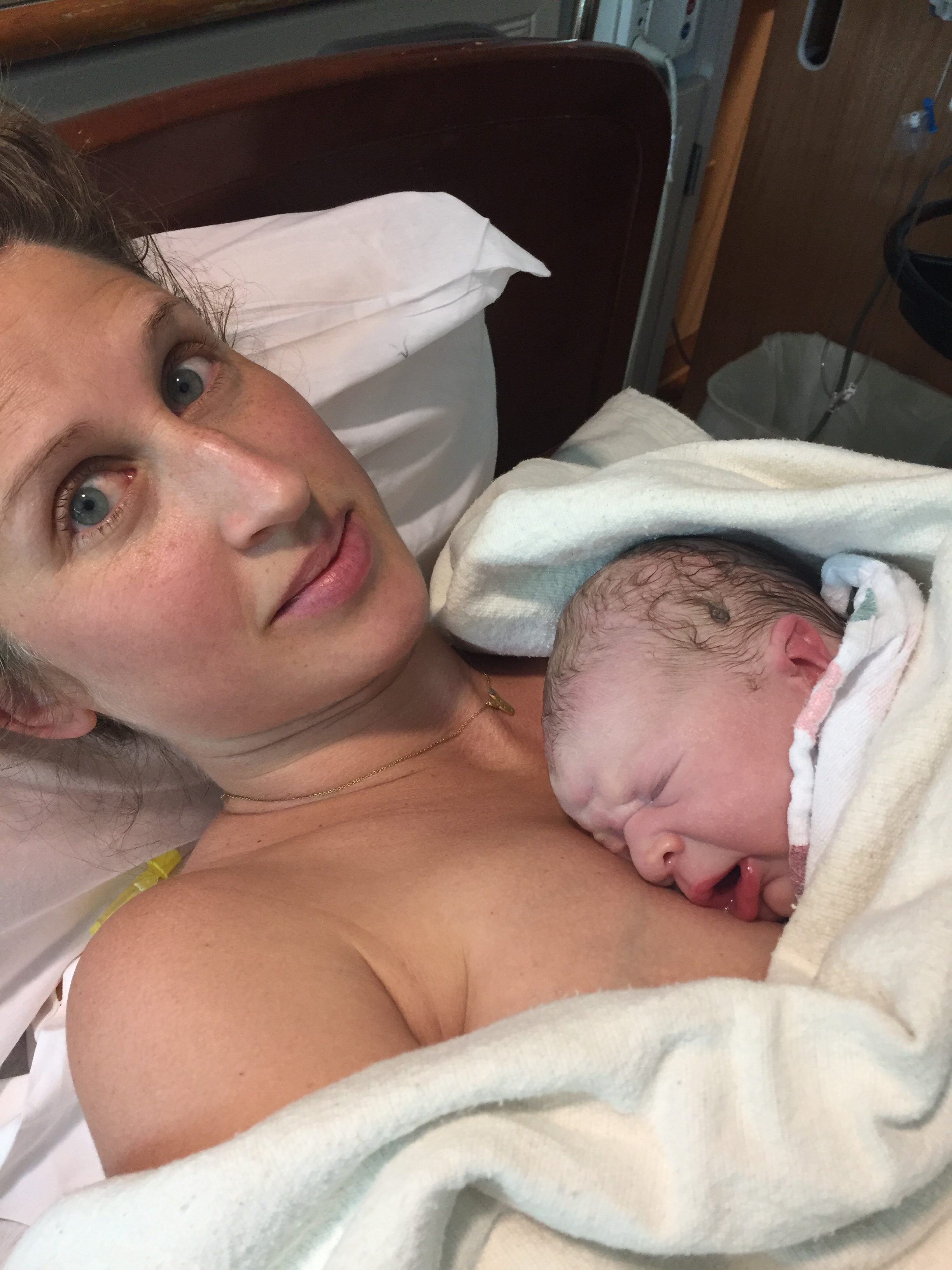 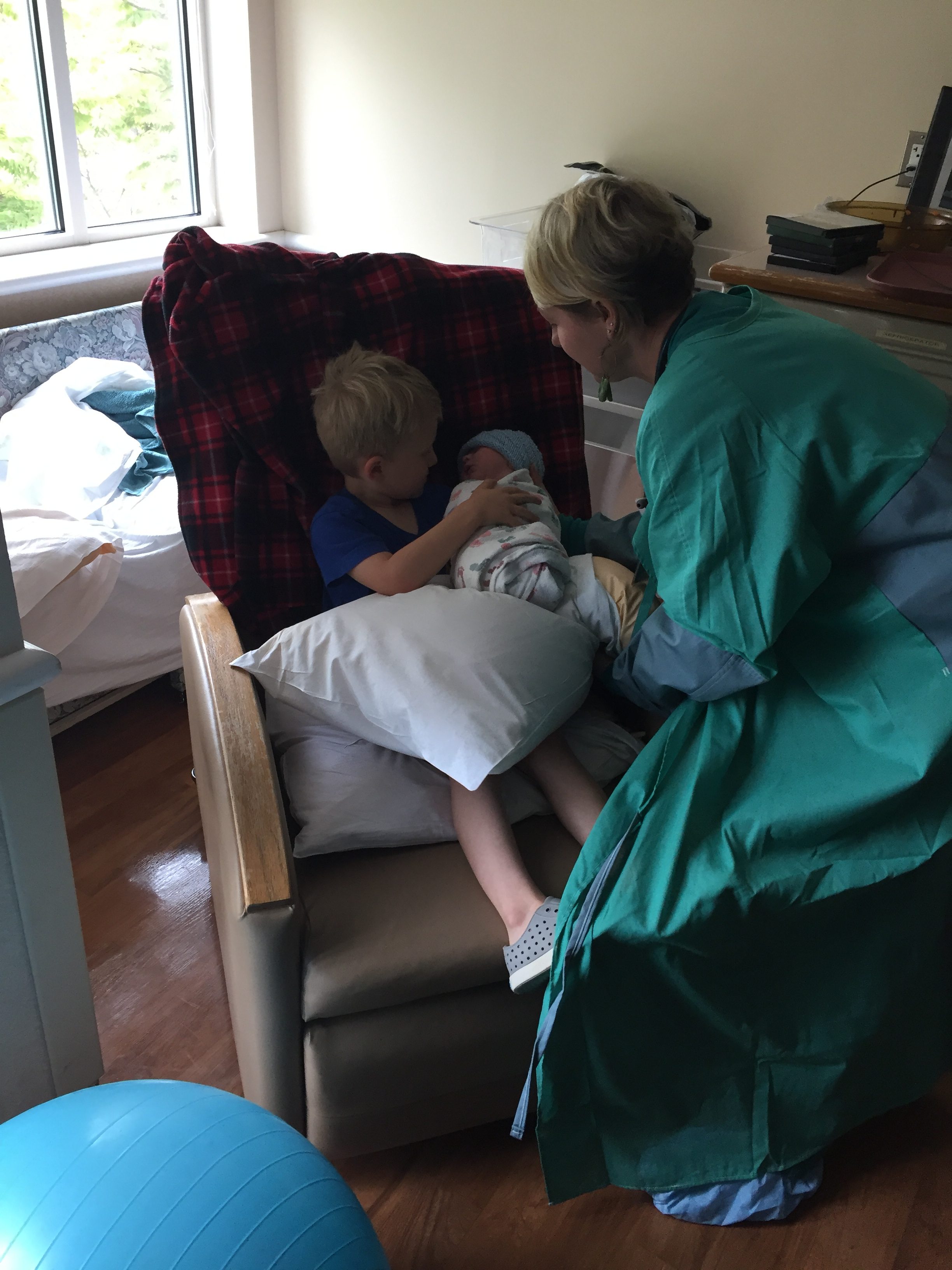 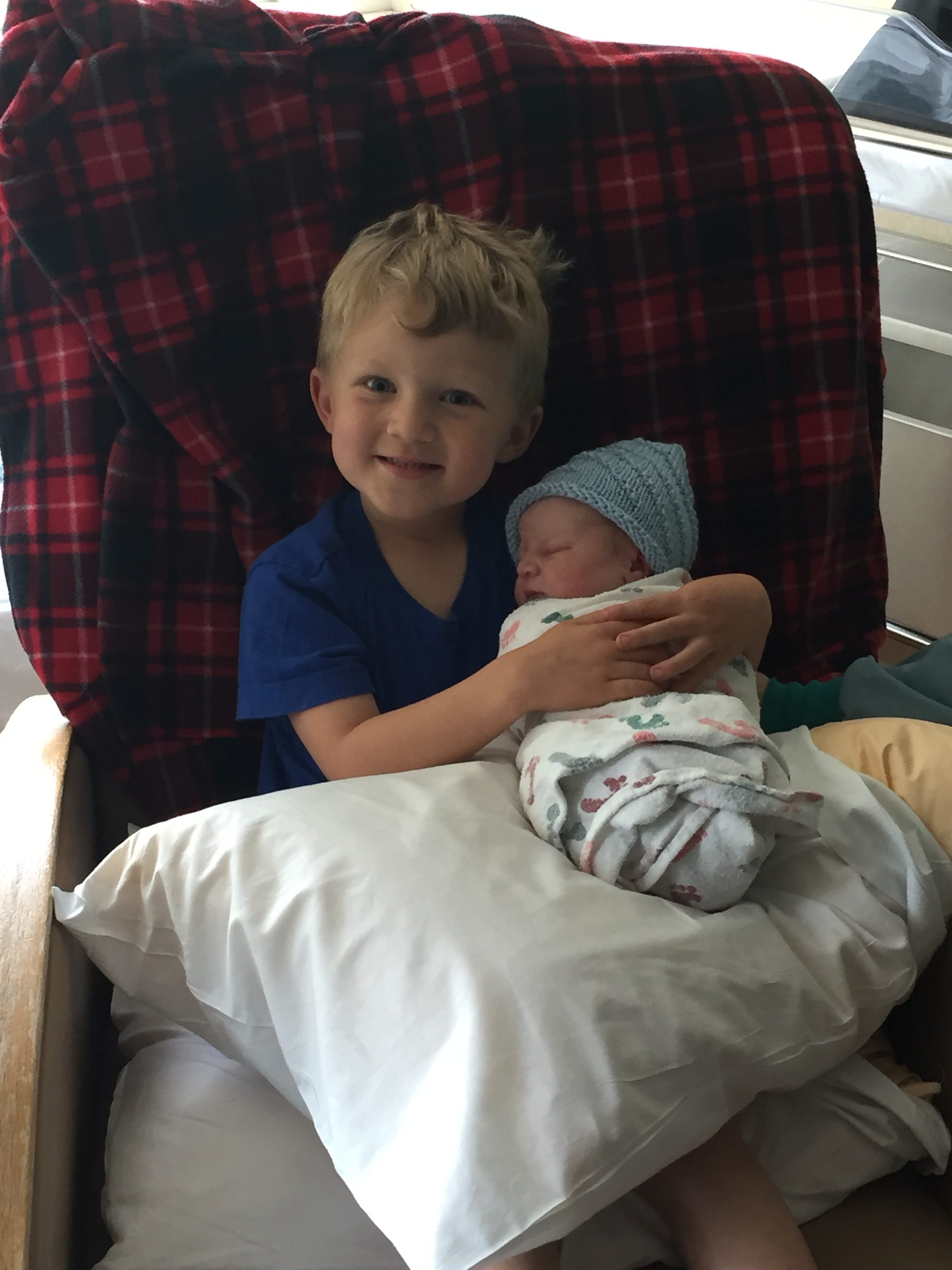 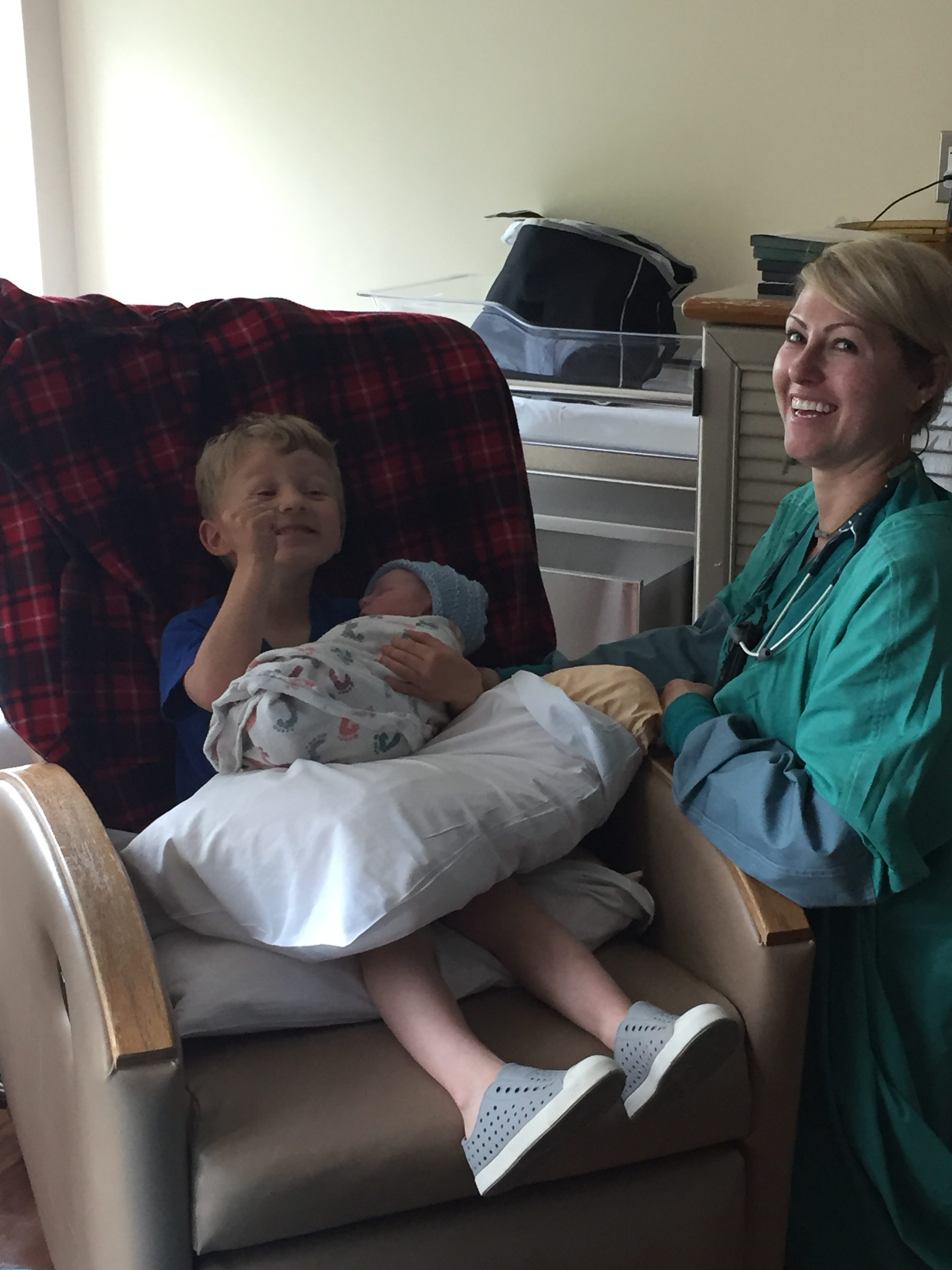 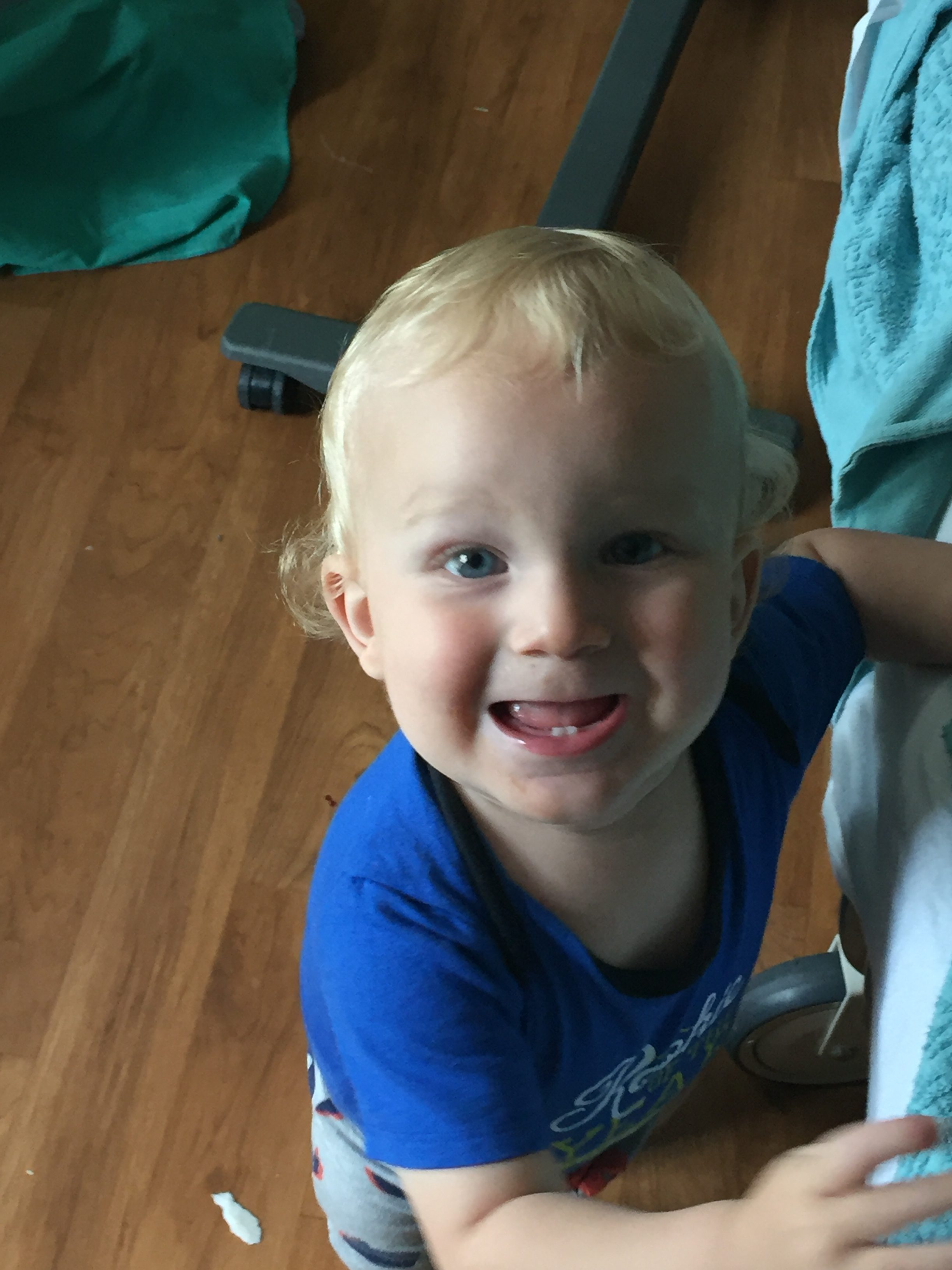 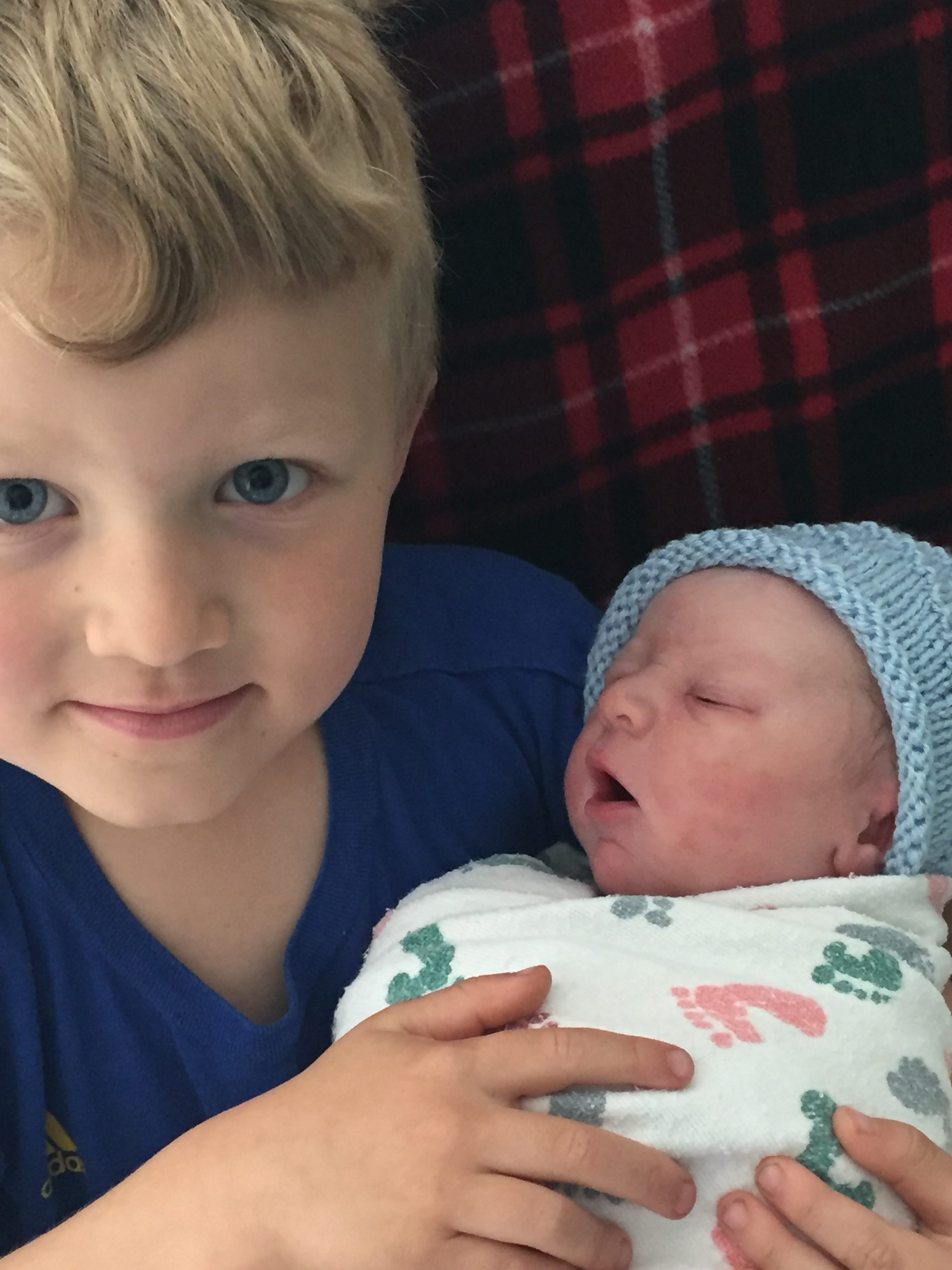 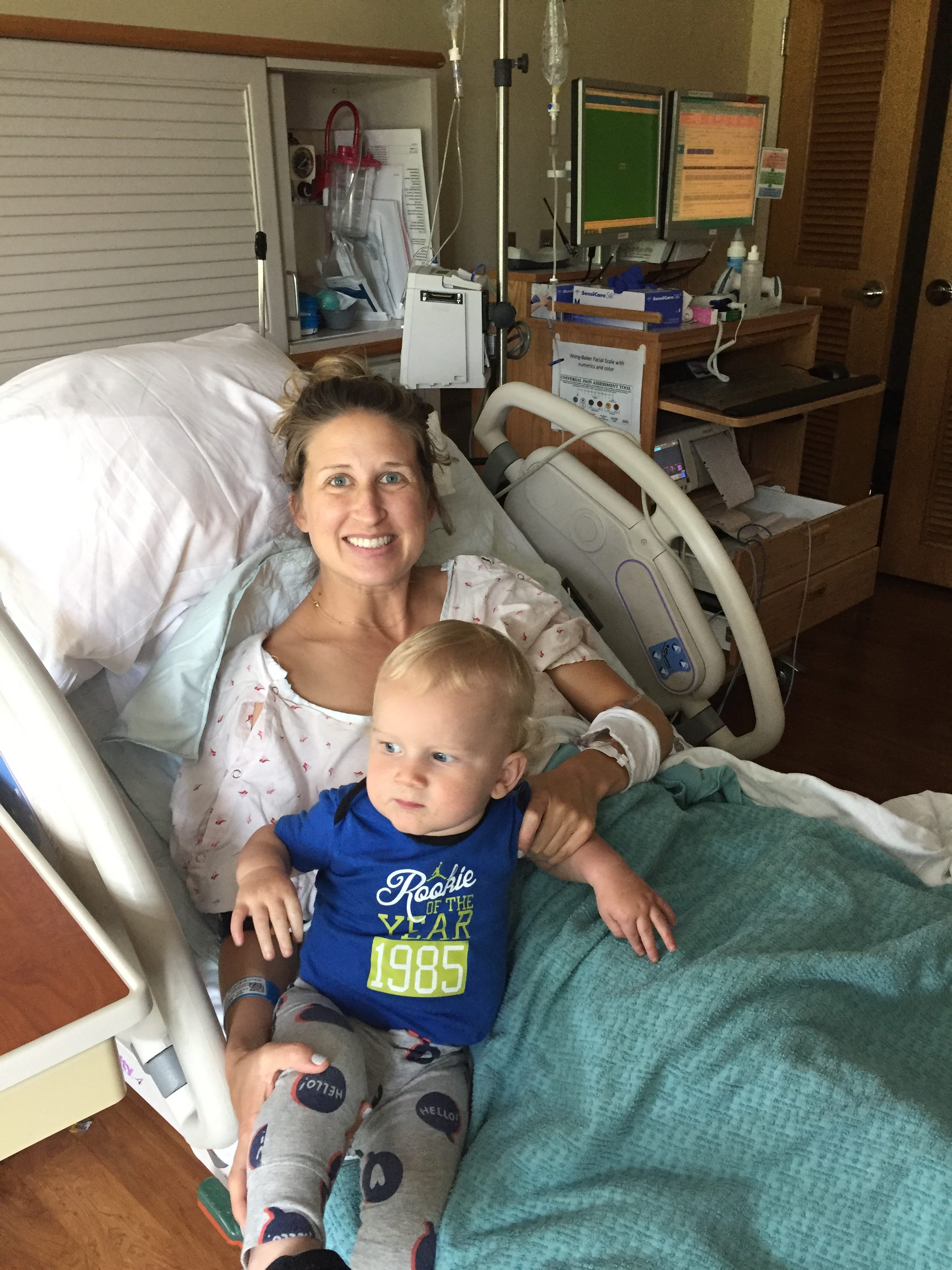 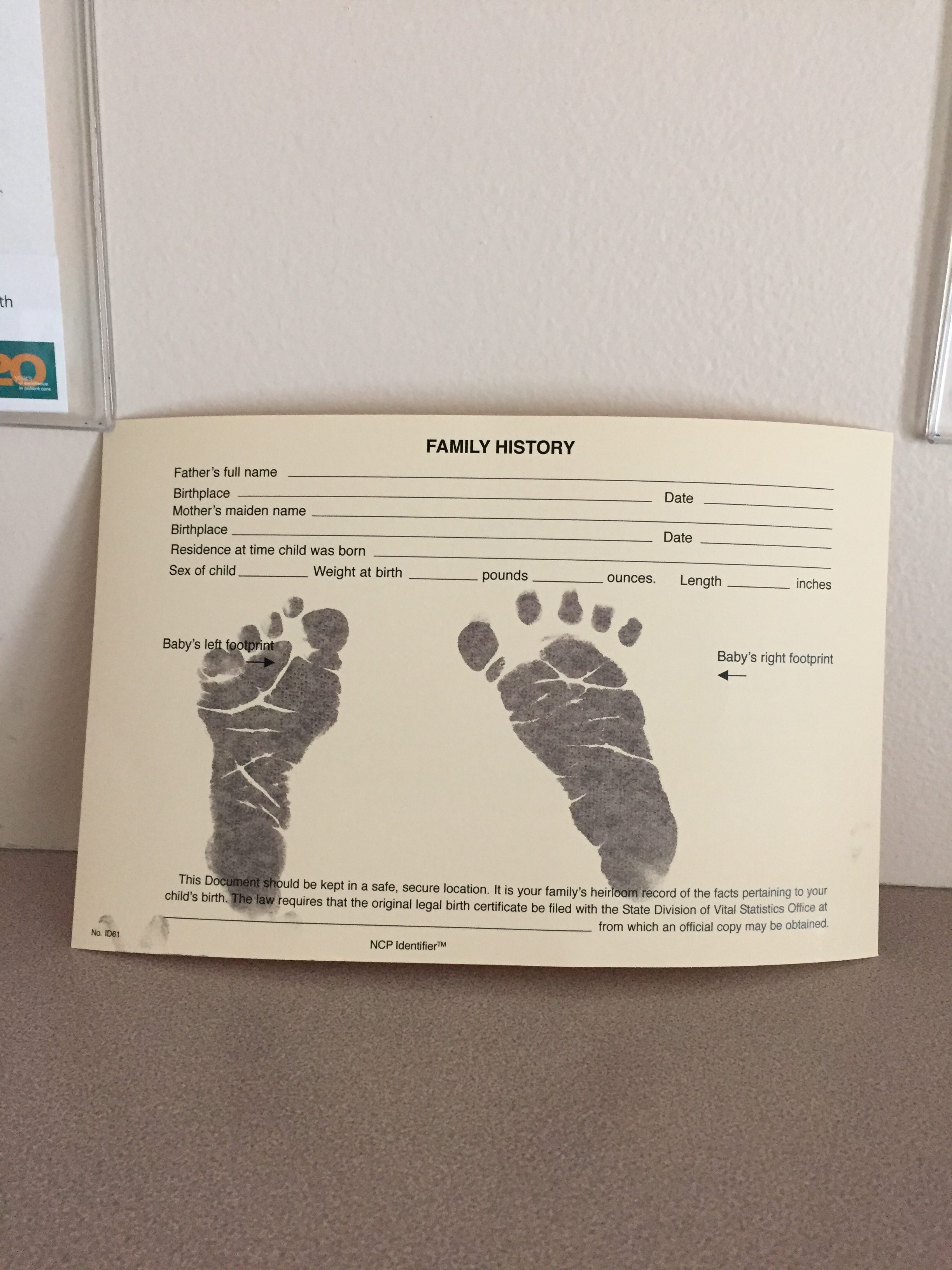 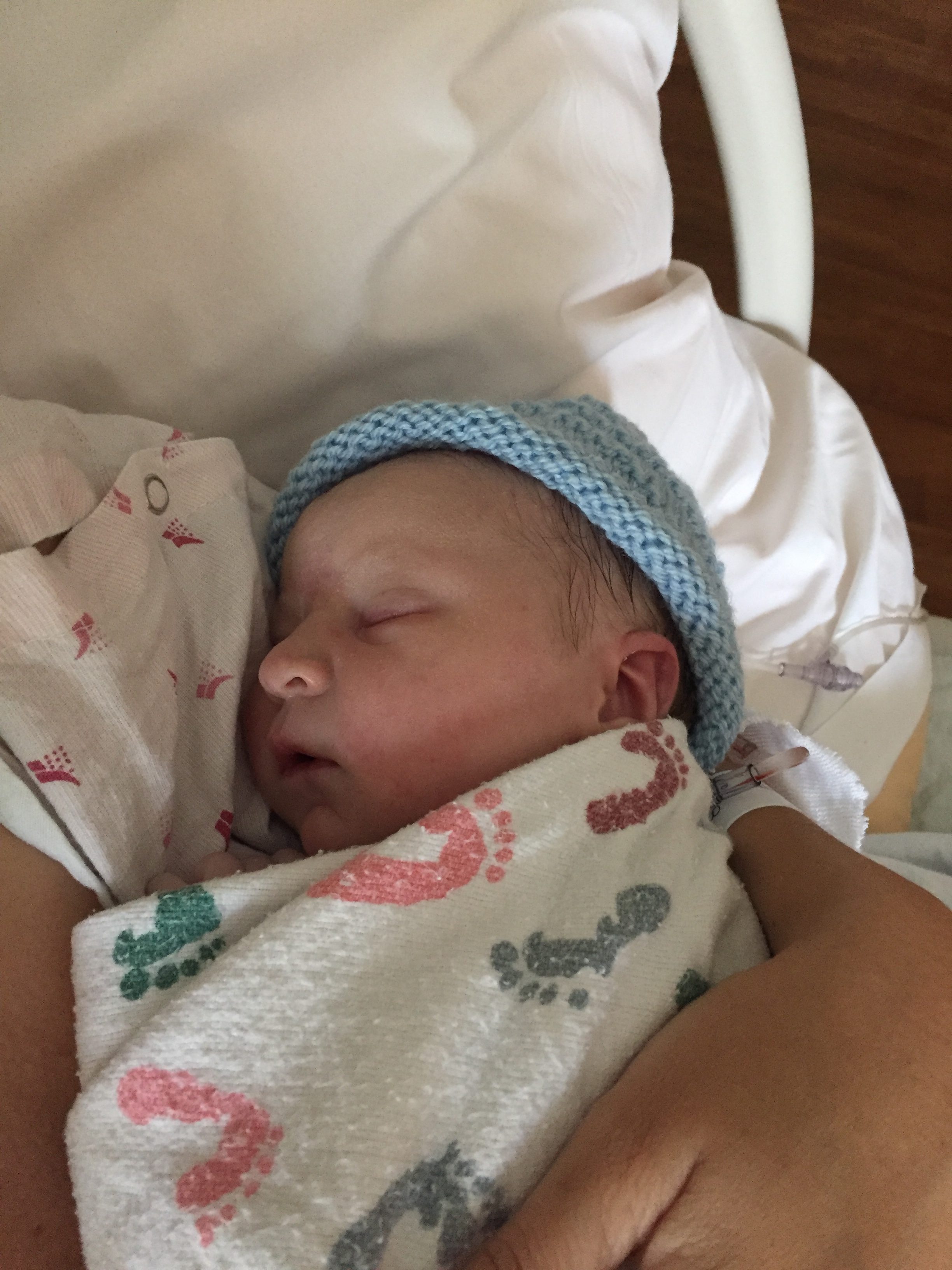 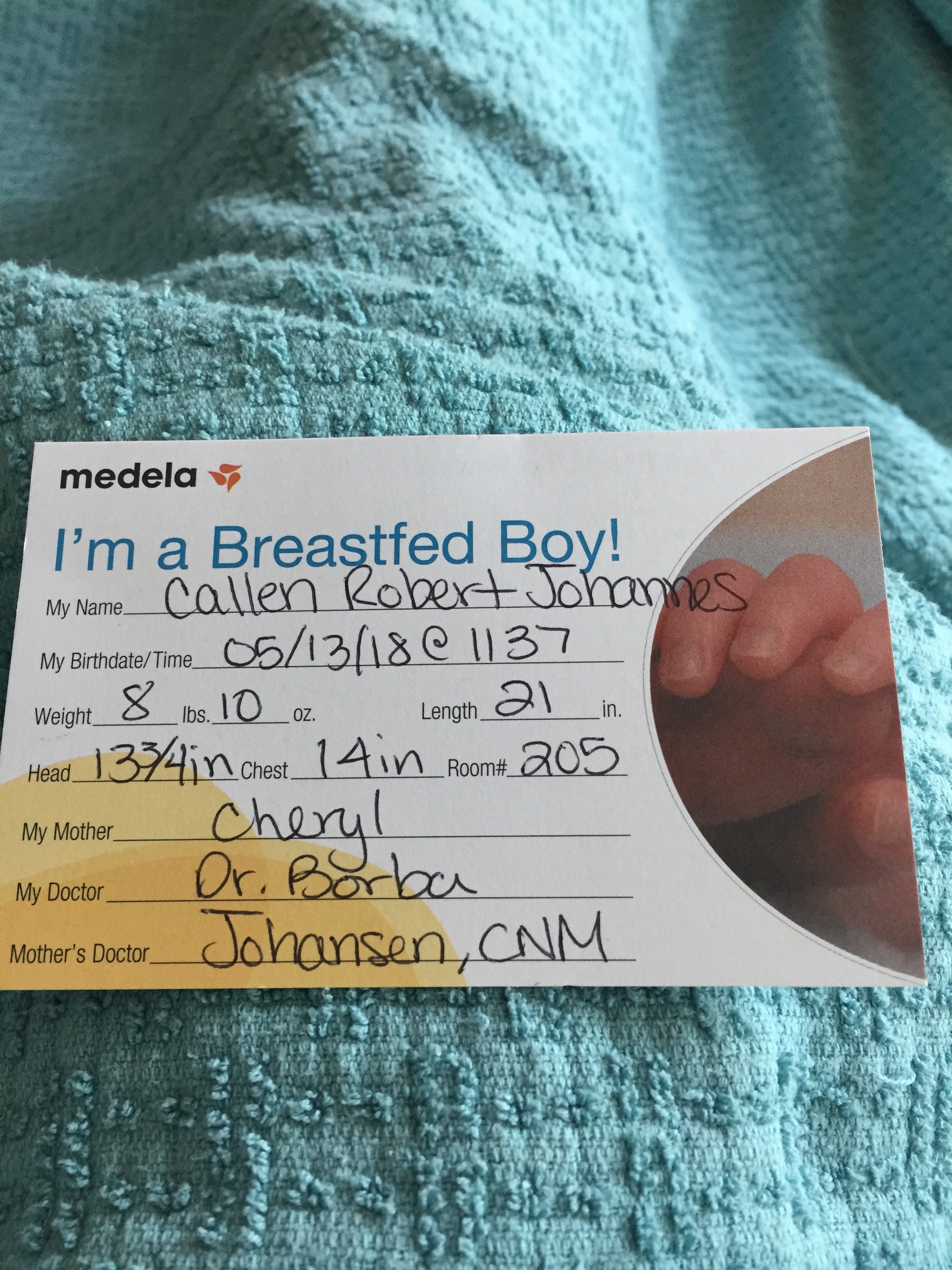 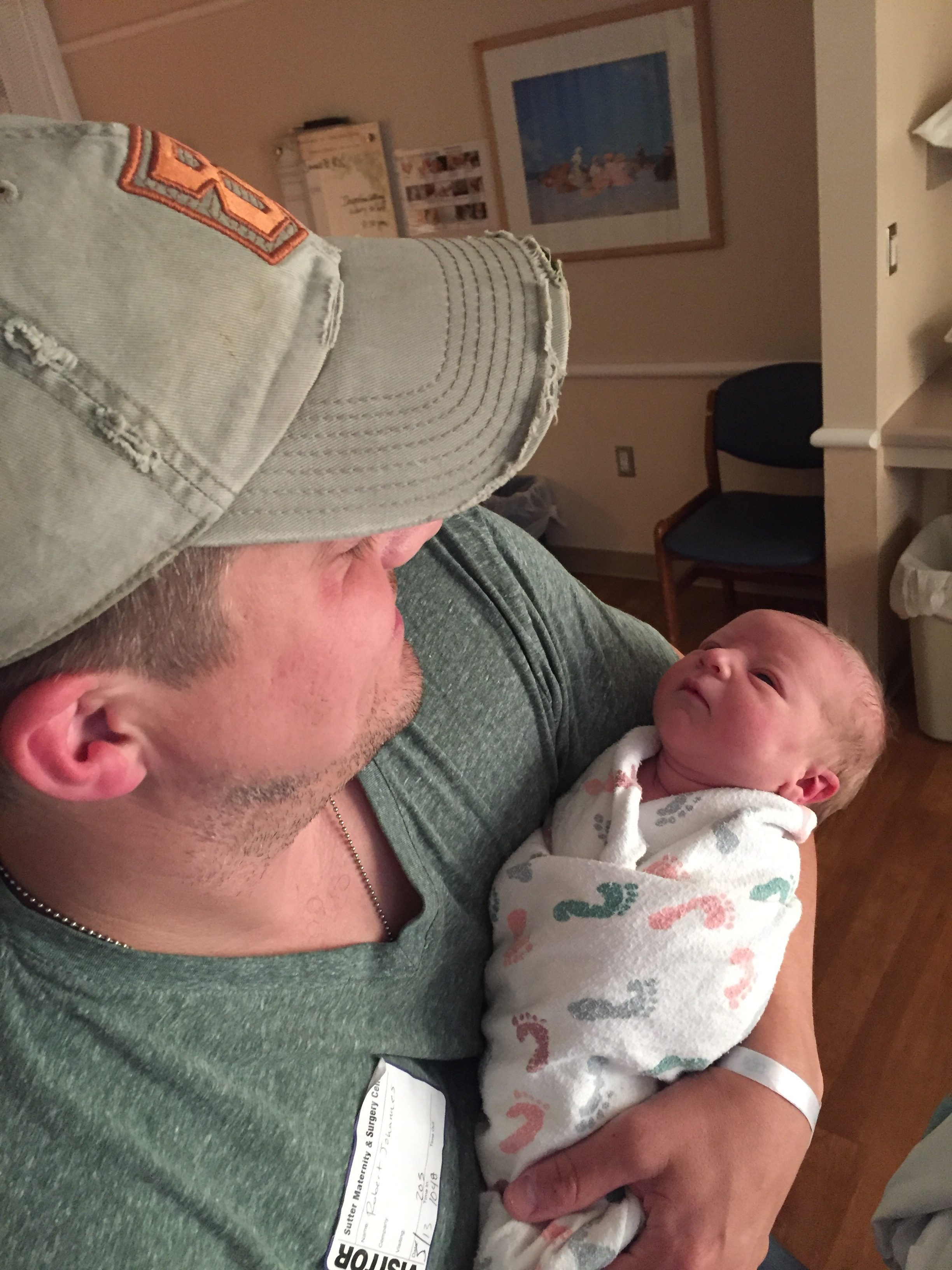 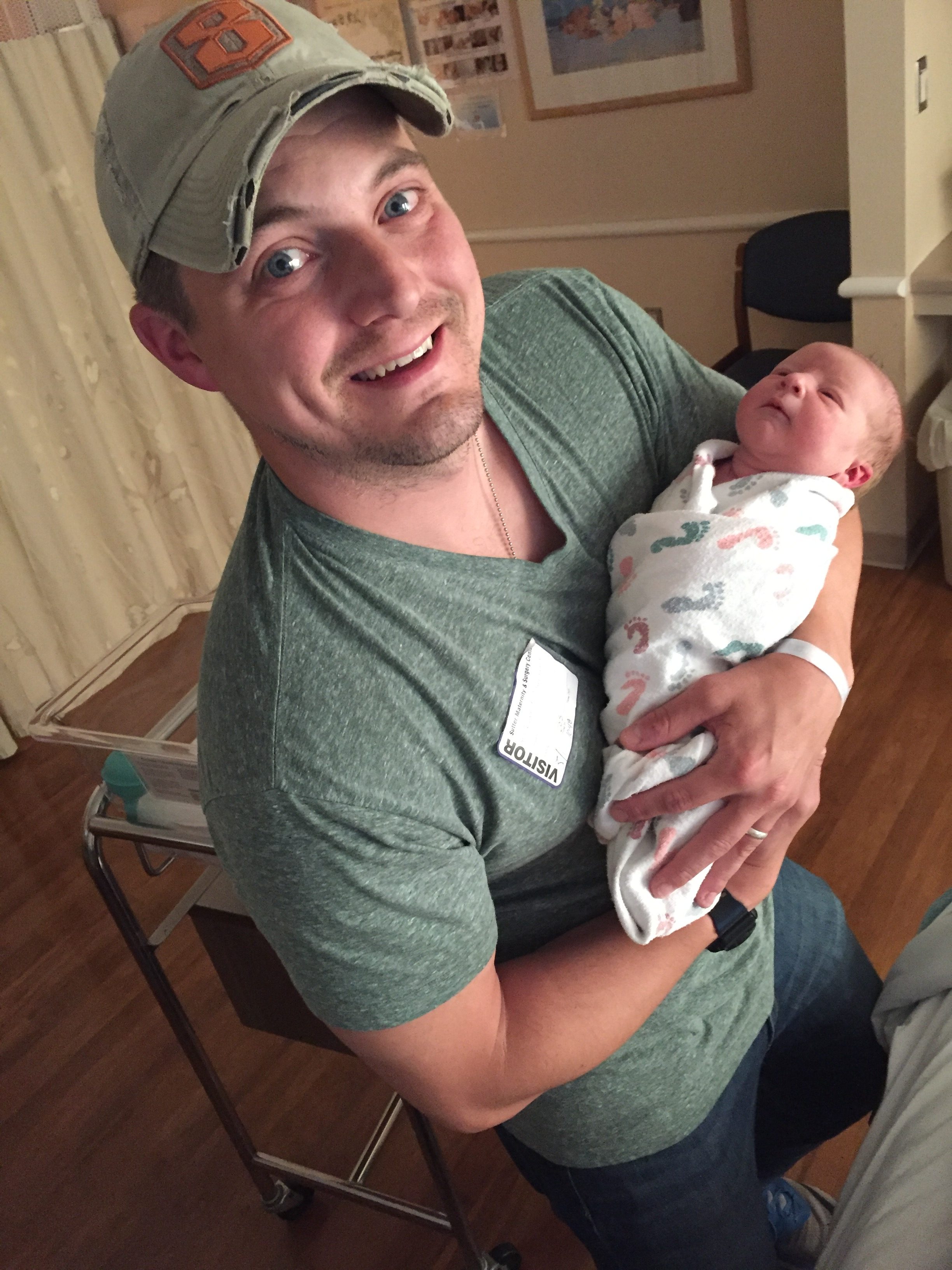 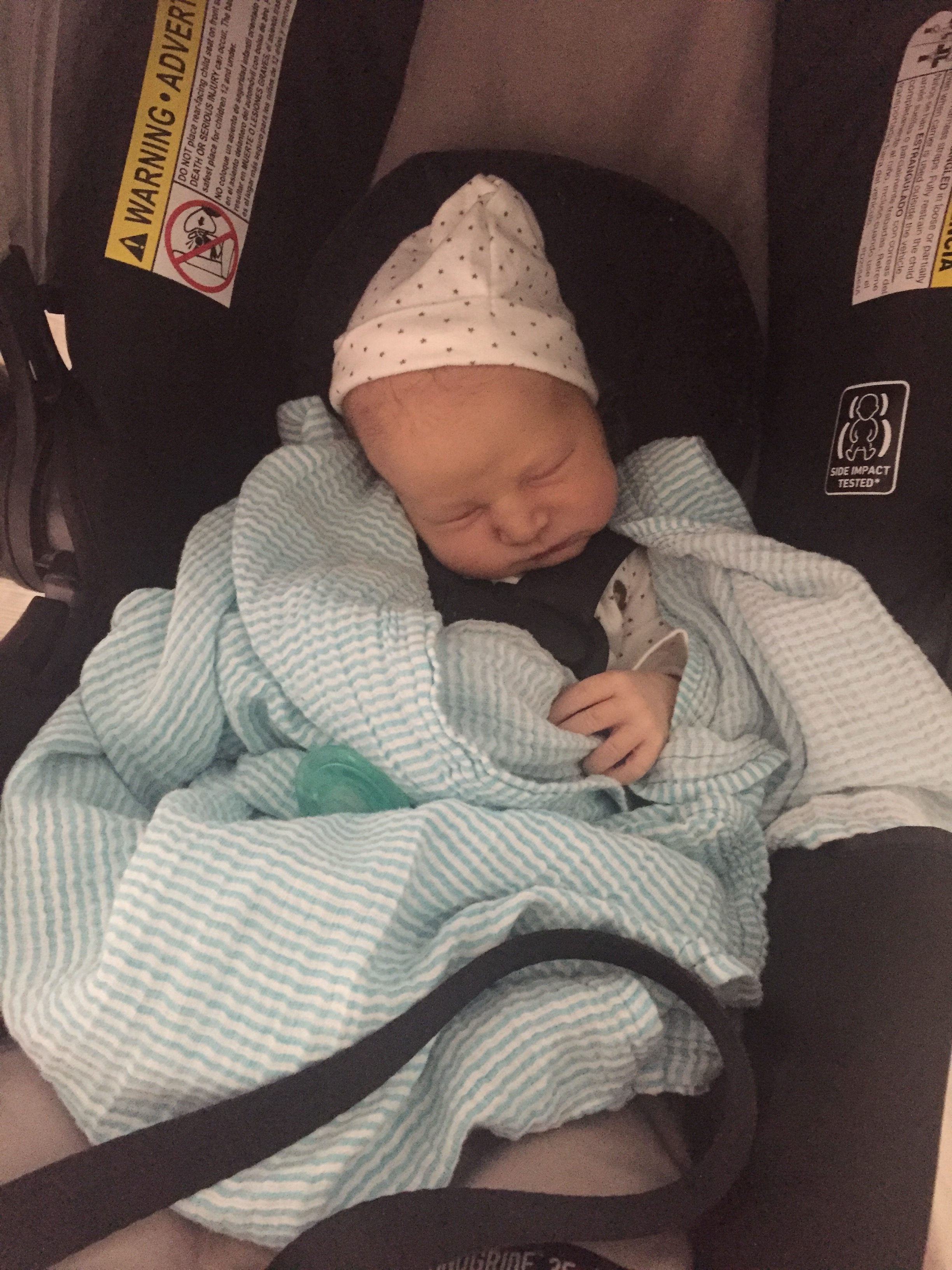 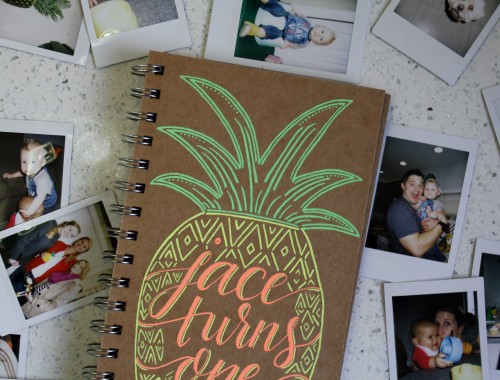 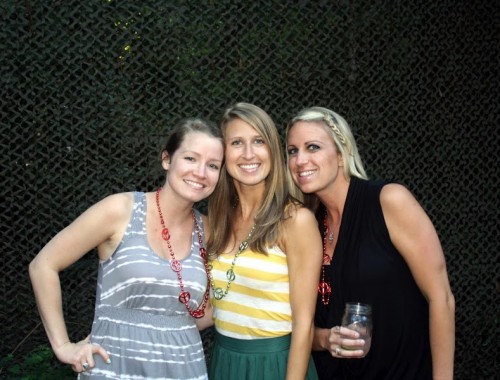 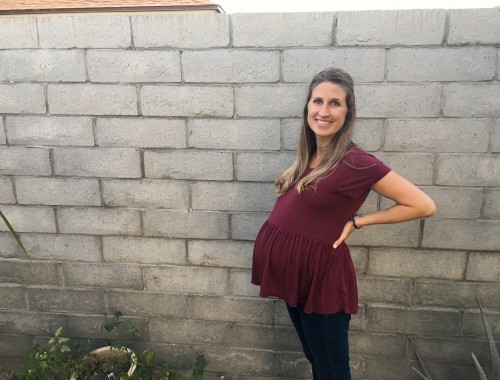